To say that I come from a mixed background is an understatement. I was raised in the Independent Christian Church movement, discipled in a rising megachurch run by one of the current promoters of Radical Christianity, and have enjoyed close brushes with Eastern Orthodoxy and most varieties of Anglicanism. I now embrace Reformed theology, but I got my first steps down that road through reading Thomas Aquinas. I spent several years self-identifying as a “generic evangelical”, and somehow I was almost completely unironic about it. I absorbed all of those influences between the ages of fifteen and twenty-five, and I have spent the time since sorting through it all.

Given that background, I could almost be a poster child for evangelical eclecticism. But a funny thing happened along the way.

In The Man Who Was Thursday, Chesterton describes Gabriel Syme’s pedigree in this way:

Being surrounded with every conceivable kind of revolt from infancy, Gabriel had to revolt into something, so he revolted into the only thing left—sanity.

Exposed to wildly varied theological influences in my late youth and early adulthood, I find myself likewise revolting into particularity. I was once proudly inclined to pick and choose the “best” parts of thinkers across centuries and competing schools of thought—and proudly called myself humble for it. 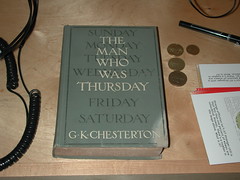 I once somewhat admired the notion of heeding the Calvinists on election, the Arminians on free will, Catholic mystics on spirituality, and certain Charismatics on the Spirit. I am now more inclined to see that as the route of universal condescension. Drilling down into one particular tradition, its predecessors and its context, as a more humbling discipline.

It is more like a hall out of which doors open into several rooms. If I can bring anyone into that hall I shall have done what I attempted. But it is in the rooms, not in the hall, that there are fires and chairs and meals. The hall is a place to wait in, a place from which to try the various doors, not a place to live in.

I would state the point in starker terms. It is not  a mere matter of camping out in the hallway of the correct building but of trying to make one’s bed in an abstract bedroom. (Perhaps claiming that actual stone, steel, and wood feel so rigid or unreliable.) The reality of the Church is far more than meets the eye, and she will not fully appear in her proper radiance until the Bridegroom comes and fulfills all things. But we cannot live in the eschaton while this age winds on.

You cannot find a generic human being.  People are not abstractions; they are startlingly concrete and specific. Families, likewise, exist in the world of experience, not the realm of the Platonic Forms. Yes, we can describe and explain families through abstraction and general concepts. But Motherhood can’t call you on the phone, only Mom can.

And the church is the same way. We don’t need abstract teachers, but concrete, specific ones. That is why Paul calls for churches to be led by overseers who “hold firm to the trustworthy word as taught, so that he may be able to give instruction in sound doctrine and also to rebuke those who contradict it.” (Titus 1:9, ESV)

We need definite pastors and church leaders. Not just so we have someone to visit us in the hospital, but for the uncomfortable reason that we need teaching and discipline. We need people responsible to call us up if we’ve been neglecting the assembly, who right there in the flesh reprove our sins and remind us of the gift of grace. Who are set aside for the task, so that rebuke and correction can be kept out of the hands of self-selected busybodies. We need a particular “pattern of sound words” (2 Timothy 1:13), both to restrain those who enforce their unique fancies and to keep standards from being too vague to enforce.

It is not only on this collective level where we need particularity. It is all well and good to point to the limits of human interpreters of Scripture and to say that no person or group is ever fully correct. But if we make those cautions our absolute principle, that makes the individual interpreter the absolute authority. More to the point, it undercuts the very good of seeking out teachers and of reading older texts. If we draw from a wide variety of sources with no differentiation, we have no point where we can defer and we can always drop one teacher at the first sign of discomfort.  It becomes very difficult to benefit from study or to gracefully receive correction.

That is not to say that one specific denomination or tradition, as currently constituted and run, is fully pure and right. Nor is it to say that we are all trapped within the horizon of our own confessional commitments. I mean to say that a robust, positive theology has to stand on something rather than nothing. If theology is to be more than a nerdy pastime, a proxy for power games or cultural dueling, or the basis of endless abstract disputes, then we each need to stand within a particular theology, following the example of particular sub-apostolic teachers, and correctable at first resort by a particular range of teachers in light of Holy Scriptures.

One final problem of strong eclecticism is that it is like standing on several stools. One can pull it off for a while, but it is a good way to fall between all of them. The human mind is a marvel at holding inconsistent positions together. This is not entirely bad—it lets us be better than our worst ideas, and it can slow down the full adoption of bad ideas long enough to learn better. But such a position has the stability of a heap of sand. It can stand for decades, or collapse at a slight shake. A mixed, inconsistent worldview is also very difficult to teach and propagate. The student need not have the same motives or personal history to hold the points of tension. In such a case, the students may well end up more consistent than the teacher, in ways the teacher may not like.

All that said, I have not abandoned the idea of broad study, or the maxim that all truth is ours in Christ. I’m still an early modern/medieval history guy who loves the Church Fathers. It is a question first of priorities and secondly of context. Priorities, in that I have a lot of catching up to do in reading the major sources of my relatively newfound tradition. More than that, as a student of history I have a special responsibility to be well informed about that to which I am most directly connected. What credibility do I have in arguing for the significance of late medieval exegetes to modern-day Reformed churches if I can’t do more than mutter partisan shorthand about our more recent exegetes?

As for context, it means reading works from other traditions from a particular position that is held by a community. Knowing and naming where one comes from makes it easier to take inventory of all those presuppositions and biases in advance, so one can see what they are doing while reading and digesting a text. That helps to establish a good critical distance to appraise the good and the bad. It also reminds one, when faced with difficult or perplexing arguments, that there may be others who have also engaged them.

Reading from a grounded position provides a basis to spot the deeper differences—and similarities—between contributors from differing traditions. It’s that very appreciation for how an idea is embedded in the assumptions of a broader theological viewpoint that makes the difference between productive cross-pollination and duct-tape-and-bailing-wire aggregation.

And most traditions include good precedents and models for broad study and appropriation. The more I read in the Reformers, or in 17th-century Anglo-Scottish Reformed authors (i.e., “Puritans”), the more I find them favorably citing works from other Protestant branches, the Church Fathers, and even medieval and contemporary Catholics. More striking than my discovery that “Puritans” wrote the largest share of commentaries on Song of Songs in the 17th century, was to see how many of them love to quote Bernard of Clairvaux on the topic. Particularity need not mean parochiality.