Before I saw these three films I was convinced that I hated QT. His overstylized strut, and clever, snappy dialog always seemed so vapid and meaningless. It always seemed to me that he was more intent on being cool than he was on being honest. I always compared him to what I hated most about cinema’s French New Wave, and noted that unlike the French New Wave, QT had no historical importance.

I’ll make a few amendments to my stance. There is no doubt that Tarantino’s cinematic approach finds it’s thickest roots in the FNW. Without the work of Jean Luc Godard and Francois Traffaut there would be no Quentin Tarantino. Tarantino makes no denial. His production company, called “A Band Apart”, is a literal translation of the title to one of Godard’s best known films “Bande Ã part” (Band of Outsiders, 1964). But here’s the difference, and this I can respect him for: while the French New Wave was so interested in cool for the sake of cool, style over content, and form over function (all of which crippled the movement from saying anything of value) Tarantino has co-opted the style and spirit of exploration of the movement and dropped its existentialist baggage.

Tarantino’s characters may talk on and on, endlessly trying to convince either themselves or others that they’re cool by the sharpness of their wit, but the bottom line is that Quentin Tarantino’s characters have definite hopes, dreams and concerns. Where theexistentialismm of the French New Wave turned each of its characters into voids whose only desires were for sex, food, or sleep and then gave some hint to their present unhappiness, Tarantino’s characters are fighters–they’re real people.

Recent examples that come to mind:

In Jackie Brown the title character is an agingstewardesss who struggles with getting old and feelings of constantly starting over without ever gaining headway. Jackie Brown is a character who desires to find a small piece of the world she can call her own, and she uses her intelligence to get there. 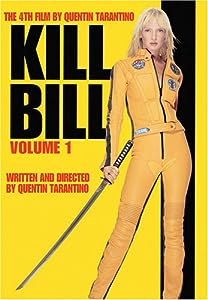 In Kill Bill (I’ll consider V.1 and V.2 as the same film) Uma Thurman’s “Bride” character wants to be a mother–she wants to live the simple life and get away from all the killing she’s surrounded by. She does all she can to attain that goal and when other’s take it from her, she gets her revenge. In the end, (SPOILERS) it is not revenge that is the sweetest, but the unexpected turn that brings the daughter she once thought dead back to her. It is sweetest that Beatrix Kiddo gets to be a mother.

After a bit of revision, Tarantino may not be my favorite filmmaker, but he is at least interesting. I don’t think we’d be hard pressed to see Tarantino as the American answer to the French New Wave. He takes on much of their style and their strut but his taste for meaningful characters and redeeming plot belies the earlier movement’s cultural roots.

I propose this: America is a nation fundamentally rooted in morality and meaning. I don’t know much of Tarantino’s history, but I wager that his being born in the heartland of America (Knoxville, Tennesseee), where christian morals are woven into the fabric of society, has had a great deal of influence on his cinematic vision– perhaps more of an influence than even the films of Godard and Traffaut.

About the French New Wave
About Quentin Tarantino