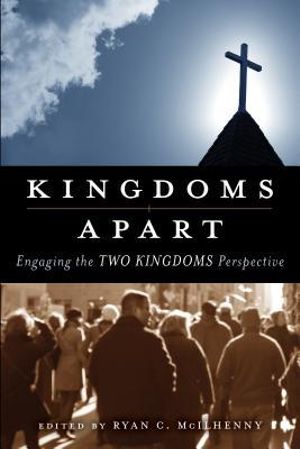 I am really pleased to welcome (again) Matthew Tuininga to Mere-O.  A Ph.D. candidate at Emory University, Matthew is one of the sharpest young Christian voices working at the intersection of religion and politics. The first part of this review can be found here. I commend his blog to you highly.  – MLA

The first and last chapters of the book, however, by Ryan McIlhenny, articulate a much better model of Christian cultural engagement, a model in substantive continuity with a basic two kingdoms paradigm if perhaps not with that of “the Two Kingdoms perspective” engaged in this book. While I do not agree with McIlhenny on every point, I do find his overall perspective to be a helpful step forward.

In the opening chapter McIlhenny, who is quite sympathetic with criticisms of certain versions of neo-Calvinism, explains why he nevertheless believes it should not be abandoned. But what is the neo-Calvinism that he is defending? The core assertion, he notes, is that Christ’s sovereignty extends to every square inch of the cosmos. He then develops this assertion in terms of four basic tenets: the cultural mandate, sphere sovereignty, the antithesis, and common grace. What is striking about this core assertion and its four tenets is that they are equally affirmed, if with some qualifications, by the leading Two Kingdoms advocate David VanDrunen. Is it possible that VanDrunen’s own project presupposes a basic neo-Calvinist theological framework?

The main difference to McIlhenny, it seems, is that while VanDrunen emphasizes the commonness of cultural activities by virtue of the Noahic Covenant, neo-Calvinists affirm that creation always had a Christological telos and that those who are redeemed in Christ are to witness to that telos in everything that they do. “Thus, for the neo-Calvinist, understanding the continued relevance of the cultural mandate, a changed life through the gracious work of Christ, opens one’s eyes to attend to the wounds of a broken world, spreading the gospel and demonstrating the love of Christ to the whole earth. Christians necessarily act on their transformed lives. Whatever Christians do, even the most quotidian of things such as eating and drinking, they must do for the honor and glory of God” (xxi).

But does VanDrunen really disagree with this point? I cannot speak for him but I am certainly not aware of anything in a two kingdoms paradigm that would lead one to say anything differently. The real question, then, is what does McIlhenny think this acting on the basis of transformed lives look like? And for that we need to turn to the last chapter of the book.

In the last chapter of the book McIlhenny articulates his model of cultural engagement: Christian Witness As Redeemed Culture. Although the chapter is a revision of an essay in which McIlhenny tried to articulate a middle way between neo-Calvinism and the Two Kingdoms perspective, even here McIlhenny is clearly seeking a position that embraces the best insights of both perspectives. Indeed, invoking H. Richard Niebuhr’s five models of Christ and culture he reminds his readers that the models “are not isolated categories to choose from. Each one overlaps, and they are better understood as corresponding moods that every Christian feels when engaging culture” (252). Stating his desire to “bridge the aisle by highlighting a feature of Christian cultural activity that both Two Kingdoms and neo-Calvinist thinkers can agree on” he stresses the character of Christian cultural engagement as a matter of witness and service in expression of Christ’s kingdom, a “setting apart” of Christian activity as “redeemed culture” in place of the transformational activism that seeks to be “externally sacralizing” by “redeeming culture, as if it were a thing to which redemption needs to come” (253). In short, McIlhenny favors transformed witness over transforming conquest.

Key to McIlhenny’s argument is his careful and scholarly definition of culture. He distinguishes between a view of culture as a thing or object that is given to us without meaning, a view he suggests VanDrunen implicitly espouses in his Living in God’s Two Kingdoms, and culture as a language of meaning, or to take the phrase of Clifford Geertz, which McIlhenny appropriates, a “transmitted pattern of meetings” (260). “Failing to recognize culture as language puts us in the habit of confusing culture with nature. It is crucial to understand this point. Presupposing culture as a thing, I believe, is a problem common to both neo-Calvinists and Two Kingdom proponents. Culture is born from human interaction with nature, as stated above, but is distinct from it” (261).

In other words, McIlhenny is suggesting that when VanDrunen emphasizes commonality between what believers and unbelievers do he is talking about nature itself, the objective stuff of life. And McIlhenny does not disagree that when it comes to this the activity of Christians is often no different from that of unbelievers. But he suggests that to properly understand what is going on in cultural engagement we need to recognize that human beings constantly and inevitably use the stuff of nature in ways that communicate meaning. In the context of the antithesis that both he and VanDrunen affirm, therefore, the ways in which Christians understand and communicate the meaning of what they do has to be fundamentally different from the way in which unbelievers do.

To be sure, the project of Christians should not be to seek to transform the culture of unbelievers – an impossible task. Rather, Christians witness by ensuring that their own culture, the meaning that they seek to communicate through their actions, is in service to Christ, or to put it as McIlhenny does, “redeemed.” McIlhenny rightly chastises VanDrunen, I believe, for being too stingy in his use of the adjective ‘Christian’, invoking Kuyper to argue that what the adjective denotes is Christianity’s influence on culture. He rightly invokes Luther and Calvin, “who understood that even the most mundane tasks such as washing dishes and tending a field were given new meaning because of the Christian’s worshipful attitude” (265).

The work that Christians do and the moral standard to which that work conforms is therefore common with that of unbelievers, as VanDrunen argues, but the way in which believers perform those works constitutes a witness to Christ. “The good works done by Christians, although common in the abstract, nonetheless can effectively win over people to the kingdom, as Lord’s Day #32 (Q&A 82) of the Heidelberg Catechism tells us” (265). The effect of this point is that it becomes impossible to make “facile” distinctions between the sacred and the secular. Affirming Darryl Hart’s definition of the secular in A Secular Faith as describing what is of this age, or what is passing, McIlhenny nevertheless points out that while Christians constantly interact with the secular, they always direct their use of secular things to the glory of God. Here he insists that “Two Kingdoms scholars ignore this neo-Calvinist distinction between structure and direction” (268). It seems to me that VanDrunen maintains this distinction in his own work, but I believe McIlhenny is correct that the distinction permits a broader use of the adjective Christian than VanDrunen or Hart acknowledge. As Ephesians 5-6 clearly indicates, Christians do all things “in Christ” even as they fulfill their very secular tasks and vocations. There can therefore be a Christian marriage or a Christian college insofar as through these institutions Christians communicate the meaning of the gospel. McIlhenny even sounds like VanDrunen (and he goes on to admit that substantively on this point “VanDrunen seems to agree with this”) when he writes, “In the particulars, Christian activity is similar to that of unbelievers and therefore part of the common, secular realm, but the picture changes when the pieces form a whole” (270, 269).

Neo-Calvinists have therefore struggled to explain what it means to redeem culture because they have focused on transforming things in themselves, “the ding an sich of material things.” Yet culture is about meaning, not material. And when it comes to meaning, “Everything we do as Christians should have a missionary and eschatological focus. Even our cultural involvement such as it is, should take place from the perspective of Christ’s coming kingdom” (271). Indeed, the preaching of the gospel, itself an inherently cultural activity according to McIlhenny’s definition, calls believers to live precisely this kind of life, presenting an identity to the world that leads unbelievers to ask for a reason for the hope that is in them. Through preaching and witness Christians therefore bring unbelievers into contact with the gospel of Jesus through which they are transformed by the power of God. Thus “It is through common or natural-law deeds – ‘our godly walk of life’ – that, as the Heidelberg Catechism reminds us, ‘we may win our neighbors for Christ’ (Q 86)” (273). Christians’ good works “are the same works [as are the good deeds] of non-Christians, but only in mere common appearance…. Christians serve in culture exactly because they have been redeemed; their redemption now surrounds everything they do and consequently communicates that redeemed identity to the world” (274-275).

McIlhenny’s model of Christian cultural engagement as the witness of redeemed culture is very different from the triumphalist and external transformationalism so often associated with neo-Calvinism and criticized by so many of the authors of this book. It amounts to a defense of the fundamental Christian idea that Christians are to witness to their allegiance to Christ and his kingdom in every single thing that they do, in every area of life. No theology of culture, it seems to me, can be faithfully Christian and yet consistently deny this point. Insofar asKingdoms Apart highlights and critiques elements of the Two Kingdoms perspective that are in tension with this basic point it performs an excellent service.

But despite some of its own claims, Kingdoms Apart should not be read as a critique of two kingdoms thinking generally any more than it should be read as a categorical endorsement of neo-Calvinism, both of which are far too diverse for such judgments of identity. On the contrary, (most of) the authors do much to show (perhaps unwittingly) that a biblical neo-Calvinism and a biblical two kingdoms perspective are not only compatible with one another, but actually need each other. I wish that McIlhenny had done more to tie the various arguments of the book together, relating his own thought to Calvin’s two kingdoms doctrine as well as to the more radical neo-Calvinism of authors like Jason Lief. Indeed, I suspect that, rhetoric aside, many of the book’s authors are closer in substance to VanDrunen than they are to Lief, one of the important points that the book’s problematic self-presentation on the dust jacket obscures. But there is no question that in bringing these essays together McIlhenny and his co-authors have helpfully illuminated some of the complex issues of culture and politics that need to be more clearly addressed by Reformed theologians. If it is interpreted through the lens of McIlhenny’s closing chapter, this book is a beneficial step forward.