Reopening the Question of China and Hobby Lobby

We’ve been through this once already, but since my friend Jonathan Merritt’s latest piece dredging up the charge of hypocrisy against the Greens because they do business in China has been sent around, so I thought I’d say one or two things about it.

Before that, though, it’s worth pointing out that this has nothing to do with any of the legal arguments that Hobby Lobby has pursued the last few years.  Hypocrites still have their right to religious liberty, after all, and thank the Lord for it. Additionally, I’d note that whatever else I end up saying about this that I think there are real questions to be answered here about how we entangle ourselves in environments where injustice is being done.  It’s obvious that evangelicals need to do a lot more thinking about dirty hands, and Jamie Smith’s recent essay is a great place to start.

But can I gently suggest that Jonathan’s essay is not how such thinking should be done?  The gist of the piece is that China does lots of bad stuff, and Hobby Lobby buys and sells goods there…ergo Hobby Lobby are hypocrites for defending the integrity of their consciences against the intrusiveness of the government. If they aren’t conflicted about their complicity in China, then why do they care about their complicity in the States? 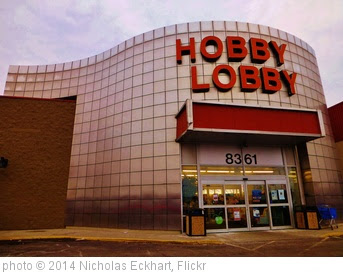 Now, put that way, Merritt’s piece highlights why everyone should be rooting for Hobby Lobby before the Supreme Court.  If the alternative is having their consciences broken by the heels of the government, then the US environment is really no better than China.  Merritt’s critique (ironically) highlights whats at stake here:  do we want a US government that is as demanding and intrusive to individual consciences as he alleges the Chinese government is, or not?  Even if we grant his point about hypocrisy, then our appropriate response should be to exhort the Green’s to revisit their business practices in China while praying they win before the Court. Something tells me that’s not quite the conclusion Jonathan was hoping for.*

But let’s take a look at his….well, I’d call it an argument but I’m not sure it rises to that level.  It gets all of its rhetorical energy on obfuscations and generalizations, which allow for the rhetorical point to go but in the olden days would have been called sophistry.  There’s a lot of handwaving here meant to make you readers feel bad about China, and doing business with China, but not very many specifics about what Hobby Lobby actually does there.  So here are some additional questions that I would want answered before making a moral judgment about Hobby Lobby’s gross hypocrisy:

I could probably keep going, but you get my point.

Jonathan wraps things up with this fun little gotcha:

“The most glaring inconsistency between Hobby Lobby’s ethical proclamations and its business decisions concerns the matter of religious liberty. The craft store chain is hailed by conservatives as standing up to Uncle Sam and fighting for religious freedom. Yet Hobby Lobby imports billions of dollars worth of bric-a-brac from a nation that denies 1.35 billion citizens freedom of worship.”

There’s lots to be said about China and its rhetorical function in American culture. (Go ahead, name me three positive things about the Chinese people or society without using the internet.) But with respect to religious liberty, Jonathan’s statement that the Chinese government are denying their citizens “freedom of worship” is a simplistic caricature of a massively complicated subject.   China as a society is more religiously open now than it has been in a long time. Among other things, the Chinese government is funding theological research in China. Even when they are tearing down churches, the situation is much more complicated than the American press generally indicates.

Is China perfect on religious liberty?  Of course not.  To quote a line that we all know well, it’s complicated. But  one-sided portrayals of the sort that are popular within the US actually matter for US-Chinese relations, as they perpetuate a vague hostility toward China when we should be encouraged about the gains in religious liberty we have seen there the past thirty years while continuing to push for more.

Is there an irony there, then, for Hobby Lobby?  I don’t think so. They could very well argue that by entangling themselves in a society that is trying to navigate the delicate balance of opening themselves slowly to new ideas (China) they are trying to be instrumental in that society for the slow, messy, often painful advancement of the good and the freedom of its citizens.  Those would be, I’d note, the very same freedoms they are seeking to protect here at home, and for which they have done so at great personal cost. They are not martyrs, and their practices deserve scrutiny.  But if Merritt is going to dismiss them as hypocrites, he ought at least do them the justice of making an argument that’s more than the smoke and mirrors he has given us here.

*Jonathan tells me that I wrongfully assume that he is opposed to the Hobby Lobby Supreme Court case. I’ve asked for further clarification on whether this means he actually supports Hobby Lobby’s case.