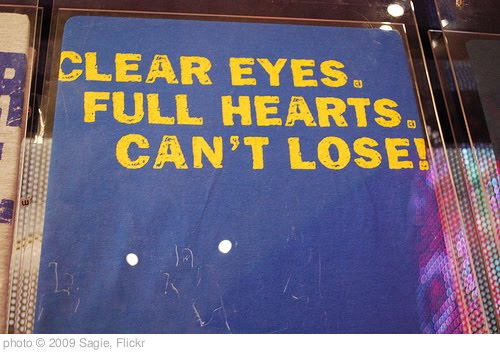 I’m still thinking through the finale to television’s best show and determining what to do next with it.  After four years together, I’m not quite ready to let go yet.

Mostly that’s because somewhere between seasons one and five Coach and Tami Taylor became something more than another married couple on television.  Their relationship and their parenting were never perfect, but unlike so many of television’s marriages, they gave us hope that “for better or for worse” could actually be true.  Not easy, mind you, but unquestionably real.  The show’s ending is so painful because we know the Taylors’s best days are always ahead–that the final five seasons of their life would have been sweeter, more tender and real than the first five seasons that we knew them.

But then, we were given a glimpse of that sweetness only because the medium made it possible.  For some years now I have joined others in lamenting the fact that Hollywood has romanticized what comes before the wedding and given us nothing after it.  But time constraints shape stories, and the deepest goods of marriage need a lifetime to encounter and explore.  Or at least five seasons (and preferably more).   The medium of television is uniquely suited (like the novel) to conveying the delicate intricacies of marital relationships and, if done well, moving us to see there is a good worth holding on to, “for richer or for poorer.”