Culture Wars and the Future of the Evangelical Political Witness

Rachel Held Evans struck a chord with her breathless reminder that when it comes to the culture wars, young evangelicals are just so over that.

There’s a lot to agree with in her post and it’s hard to not wonder how pyrrhic the marriage “victories” ultimately will prove.  The best way to ensure that the principles beneath the marriage amendment in North Carolina grows in more fertile soil is to hold it with something of an open hand.  Even if it is never overturned, no one likes a boastful winner.

What’s more, the categories of “winning” and “losing” seem alien to the work of discerning and crafting legislation, and even in another world getting it passed.  Yes, the hostilities exist and the sides are deeply divided.   But the only way through the culture wars is not to shout about our need to go beyond them, but to set about ignoring them altogether and get on with the work that is given to each generation:  providing the positive vision for society that has been informed by our Christian commitments. 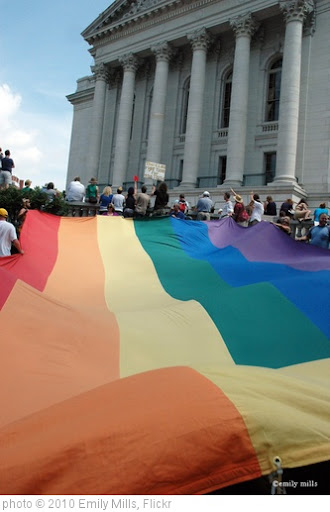 It may be, in fact, prudent to simply avoid celebrating much altogether.  We ought to recognize, after all, that the overwhelming passage of traditional marriage amendments are not signs of our society’s health, but its disease–and we are all implicated in it.  Legislation ought to be the fruit of a long and careful discernment, what some have called “judgment” if we can get beyond the stereotypes for a moment.  That process costs us all something, for it demands reflection upon both the moral norms we ought to strive for and the society in which we live.   The attempt to close the gap, with legislation or some other effort, must be founded upon the recognition of failure.  It will not do to foist the burden of responsibility on others before moving on.  Not as Christians, anyway.  “Weep with those who weep” is an exhortation given to the church, but it is for the world.  For as George MacDonald wrote somewhere, were it not for our tears the world would not be worth saving anyway.

It is clear in light of last week’s events, though, that those who have spoken of the culture wars’ completion were considerably too hasty with their judgment.  The younger evangelicals of the moderate variety may be gaining in strength and number, but they are still rowing upstream.  And we are mostly living off the culture war’s legacy, too.  Those who shout the loudest that the culture war needs to end stand to gain the most by it continuing.  Ressentiment is not a phenomenon bound by age and it seems like there is plenty of it among Rachel’s commenters.

The real question that everyone wants to know is what comes after the culture wars.  And here, beyond the few platitudes that I’ve now heard enough of, no one seems to have much of an idea.  I’m on board with Rachel’s suggestion that we ought to share stories.  But my experience makes me think that sharing stories is helpful for establishing friendship but not exactly sufficient for unwinding what shape our society should actually take.  I can’t imagine any of my gay and lesbian friends resting content with sharing their story with me without them agitating to get me to vote differently.   Most of them are looking for social and legal changes based on the perceived (and sometimes real) injustices they have experienced.  And so they should.  But that simply means our political and legal differences take shape within the context of a friendship that is almost inevitably strained because of those differences.   Stories have changed much for me, but I remain a gay marriage skeptic.  And while I work to keep the question open for the sake of inquiry (doing better with this at some times than at others), I have confidence in my position and can’t forsee ever changing it.

Of course, I have never been much of a culture warrior.  I have been to the Values Voter Summit and while I remain friends with folks at the Family Research Council, I found the whole thing off-putting.  But the possibility of evangelicals being conservative without engaging in the culture wars tends to get lost among younger evangelicals.  Many people in North Carolina doubtlessly were of the culture warrior variety.  But if I know anything about the Acts 29 movement, I find it laughable to believe that folks in J.D. Greear’s church would be among them.

“There are many times,” Oliver O’Donovan once said, “when the most pointed political criticism imaginable is to talk about something else.”  When Jesus says to render unto Caesar that which is Caesar’s, he does not make Ceasar irrelevant.  But he does ground his political theology in a sense of indifference, undermining the passions that would have incited both devotion and rebellion.  Jesus first concern is government, but the point has implications for all those creaturely realities that we might be tempted to exalt above the Kingdom of Christ.   Like Caesar, “culture war Christianity” has become an object of either devotion or rebellion, a matter for defense or denial by evangelicals both young and old. We  have not yet escaped its grasp.  And we only will when we can begin our political theologies by speaking of something else.