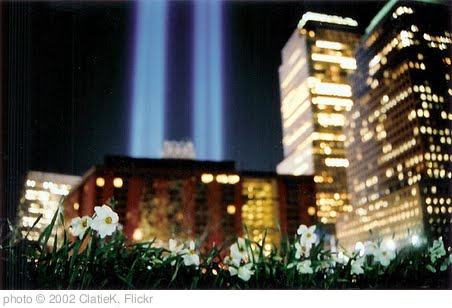 I was sitting inside a prayer chapel, trying to meet with the Almighty.

When we say where we were, we fold the world into our own stories, weaving it between the mundane and the miraculous as a way of making sense.  It is a way of organizing things.  And like the weather, the commonality of “where” gives us all a space in which we can meet each other, pause, and listen.

The significance of 9/11 could never be reduced to the role it played in our lives.  The events of Iraq afterward, the expansion of the security state, the eagerness to sell homes to restart the economic machine–the  gods returned to their struggles, and the momentary unity that emerged out of the horror and sacrifice slowly eroded.

But for most of us, those global events cannot be fully understood without also discerning the ways in which the contours of lives and habits of seeing and reflecting also change.  We have heard the news anchors and the pundits, but we should not neglect its meaning in our own lives as well.  That discernment begins in the memory, and memory is inextricably linked with place.  The greatest theological biography of Christian history, Augustine’s Confessions, is tied together in part by the places that frame Augustine’s narrative.  Carthage, Rome, Milan, Ostia:  Geography and history are ultimately interdependent disciplines.

The pews in the chapel made prayer difficult, but the music from the trucks outside made it impossible.

Only two days before, I had led worship for Biola’s weekly worship service.  A particularly special time.  Confession and lamentation, followed by resting in the redemption we have in Christ and God’s providential care over his creation and ending by rejoicing that our mourning would become dancing.  The moments singing are as easily recalled for me as any during that season. There is something to that story, and it framed the events of 9/11 for me. The God who laughs the nations to scorn will someday have his vindication.

The days following were spent talking of war and rumors of war, and of leaving behind our studies to serve our country, and of whether it was right to ask citizens to consume as their patriotic duty.  We read “Learning in Wartime” and tried to remember with Lewis that 9/11 had created “no absolutely new situation” but had “simply aggravated the permanent human situation so that we can no longer ignore it.” And in large part, we were successful.  We relished the luxury of our first-world education, recognizing its perilous condition amidst the fragility of the world, and desperately wrestled with the permanent things in hopes that any wisdom we acquired might someday help another.

The music from the trucks was interrupted by the announcer, and so I gave up my attempts to pray and listened.

The decision to reflect about events as important as 9/11 through our own experience borders on narcissism.  But there are few moments in our lives that so obviously and clearly matter, when the day is filled with presence and the inescapable fragility of human life is made so tragically apparent.  My friendships with many of the young men who I now consider brothers were then in their infancy, and the shadow of tragedy gave our conversations and relationship an urgency that many of us had never known before.

Most of us shrink, and rightly so, from attempting to cut through the complex character of that day and the world it created, and embark instead down the path of recollection and sharing.  But that path, which begins in recalling a place and time, can lead to a civic friendship where we allow, if only for another moment, one thing we have in common overwhelm our differences and move us a step closer to the path that leads to charity and grace.

I slowly realized the music would not be returning, at least not for a while, and that my class would soon begin.

And so I knelt and mumbled the Lord’s prayer.  Though we would later be told how much the world had changed, on that morning it was a matter of realizing that the prayer that we so desperately needed was still the one that our Savior had taught us to pray:

Our Father who art in heaven,
hallowed be thy name.
Thy kingdom come.
Thy will be done
on earth as it is in heaven.
Give us this day our daily bread,
and forgive us our trespasses,
as we forgive those who trespass against us,
and lead us not into temptation,
but deliver us from evil.
For thine is the kingdom,
and the power,
and the glory
for ever and ever.
Amen.