In the past month there has been a fascinating exchange going on between occasional Mere O contributor Brad Littlejohn and DePaul’s William Cavanaugh. It started with this critique of Cavanaugh’s work by Littlejohn:

Even if Pinker were right, however, Littlejohn is wrong to think that it would refute the central thesis of my book on “religious violence.”  My book is not an attempt to prove that modernity is more violent than previous epochs.  It is indeed not an exercise in “modernity criticism” at all.  It is a critique not of modernity as such, but of one of the primary ideological defenses of modern liberal politics, that is, the idea that there is a transhistorical and transcultural something called “religion” that must be tamed by the secular nation-state because religion has a peculiar tendency to promote violence.  My point is not that violence is a creation of modernity or that things in general used to be better than they are now.  My argument is negative: the myth of religious violence is false.  There is no coherent way, either now or in previous eras, to separate religious violence from secular violence in such a way that the former is peculiarly more pervasive or more virulent than the latter.

In his response to my post, Cavanaugh tried to insist that his main point had been only to decry the violence of war which early state-makers created, a violence which he says, according to Muchembled, simply redirected young men’s killing energies from neighbors to foreigners.  I would contest this defense at both levels.  First of all, that is not really Muchembled’s main argument, and if it were, it would be considerably overstated.  While there are some areas, such as Scotland, in which internal violence was essentially just redirected into military service, standing armies were too small a proportion of the early modern population for that to be the main explanation in most places.  Nor am I convinced that war deaths increased dramatically from, say, the 15th to the 17th century, cancelling out the plunging homicide rates, as Cavanaugh seems to want to argue.  Medieval wars were smaller and more local but more frequent and often quite brutal.  Second, however, I’m not convinced by Cavanaugh’s claim that he was only “referring to one specific kind of violence, that is, war between sovereign states.”  Although Tilly’s account, on which Cavanaugh is relying in “Killing for the Telephone Company,” is quite one-sided, Tilly talks not only about state-makers offering protection against external threats, but internal ones as well.  In his essay, Cavanaugh then goes on to blame the war of individuals against one another within society as a product of the state, as we saw in the quote above: “this reconciliation  [of many into one] only comes after the creation of a prior antagonism, the creation of a novel form of simple social space that oscillates between the individual and the state.”  To this I simply point out again that the antagonism was already there—the local forms of authority that predominated in medieval times were no guarantee of social harmony. 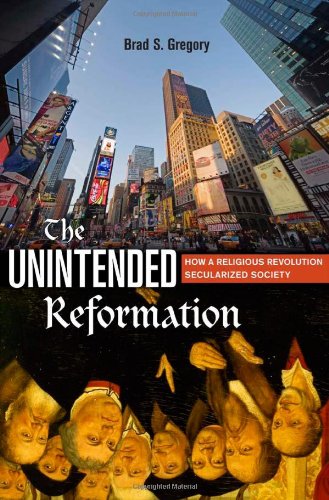 In a discussion of Brad Gregory’s book The Unintended Reformation held at the University of Chicago, Brown University’s Rachel Fulton Brown raised an interesting possibility about Gregory’s argument that would apply to William Cavanaugh’s work as well, I think: Gregory’s book is less about romanticizing the medieval period and is much more about a certain wistfulness for a world that never had the chance to exist. In other words, certain cultural and philosophical movements in the late medieval world (most notably the humanist movement spearheaded by Erasmus, but the conciliar movement also deserves mention) looked like they could reshape aspects of the medieval world for the better without burning the whole thing to the ground and starting from scratch. But with the Reformation and the chaos that followed it, the possibility of an improved medieval world was destroyed and replaced by modernity.

In other words, we’re arguing over two equally problematic choices–the secular violence and totalitarian nature of the modern nation state or the coercive power of the church and political dysfunction of the medieval era. Both Cavanaugh and Gregory are saying something quite similar. They’re not saying “get rid of modernity and revert back to western Europe circa 1500.” They’re saying that there is a way of moving past the worst excesses of medieval culture and politics without adopting the radical changes brought about by modernity.

As a historian, Gregory is wistful for that world. As a political theologian, Cavanaugh is keen to introduce the modern church to its possibility.