The New Puritanism: Chick-fil-A and Boycotts

I had planned to avoid the Chick-Fil-A brouhaha for the reason Sarah Pulliam Bailey lists here:  seriously, people, this is news?  In case you’ve missed it, Chick-Fil-A is closed on Sundays.  They’re not exactly the most liberal group and have been that way since the beginning.

But now Chicago is doubling down on Boston’s wariness about letting in new restaurants, all because Dan Cathy said–well, what exactly did he say again?  Apparently not what the media reported.  But then no one needs details when the fury’s afoot. 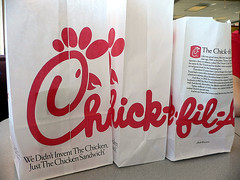 This, of course, is not the first boycott we’ve seen this year.  Starbucks was dumped by a goodly number of people for moving gay rights to the center of their brand.  We talked about the ethics of boycotting around that time, and the conversation will doubtlessly come up again.

But not today.  No, today I want to explore a different angle:  the rise of the new Puritanism, the legalistic restriction of our choices and options based on the erosion of services as services because they’re now statements.

My friend Jonathan Merritt raised a reasonable question amidst the rest of the furor:

I’m flummoxed that so many consumers are so quick these days to call for boycotts of any company that deviates from their personal or political views. For one thing, boycotts rarely cause actual pocketbook – rather than PR — damage. Most consumers don’t care enough to drive an extra mile to get the same product from someone else. And that’s especially the case for companies as large as Chick-fil-A, which has prime locations on many college campuses where there is little head-to-head competition.

But my bigger question is this: In a nation that’s as divided as ours is, do we really want our commercial lives and our political lives to be so wholly intermeshed? And is this really the kind of culture we want to create? Culture war boycotts cut both ways and are much more likely to meet with success when prosecuted by large groups of people, such as Christian activists, who are more numerous than gays and lesbians and their more activist supporters.

Let’s work through this slowly, but not with much detail.  We’ll fill that in later, if the big picture proves worth it.

It seems to me that we’re going to see more of these sorts of boycotts going forward, and that the cultural pressure creating them has been at work for a while.  Two interwoven threads, specifically, seem to be significant:

First, if you buy (while appreciating the irony) the story of consumerism, then purchases aren’t simply the sorts of things that fill a need but are rather ways in which we express our “identity,” our most deeply held values.  They are, to use an Augustinian turn, expressions of our loves and those loves make us who we are.  TOMS Shoes is trying to do good and that’s part of the appeal.  But it’s also got cultural cache that comes with the brand.  You’re not just wearing shoes, after all, as much as joining a movement.  Nike had “Just do it” and all the hipsters decried advertising, but TOMS offers “One for One” and now we smile and nod.  It’s the same sort of identity expression, except with a more socially minded gloss.

And there is the corollary development in all this:  the self-conscious turn by the corporation from maker of products to expresser of values.  Think through the two major boycotts this year, Starbucks and Chick-Fil-A:  which of those had to do with the products the company produced?

It be folly to think that companies have ever escaped having values.  Yet those values seem to have been, well, tied to their products.  Industry.  Thrift.  Quality construction.  Chick-Fil-A’s decision to close on Sunday’s is a decent example of this:  I suspect it doesn’t actually hurt their bottom line nearly as much as people think because everyone is happier and more productive the other six days.  It makes a better product through creating a better workplace.  But what, pray tell, has Starbucks’ support of gay marriage to do with their internal “culture” or bottom line?

You can judge the transition, I think, by contrasting these boycotts with those from years past.  The Religious Right took on Disney and K-Mart, most famously, but for slightly different reasons than people are protesting Starbucks and Chick-Fil-A.  In Disney’s case, well, they were making content that the Southern Baptists didn’t much like and were hosting parties at Disneyland that the Baptists wouldn’t attend.  K-Mart owned Waldenbooks, and they sold porn.  In both cases, it wasn’t simply the internal “culture” or a commitment to tolerance:  there were products that were coming out of those values, products that a constituency saw fit to reject.  We don’t have to agree with those decisions to note that something has shifted.

The effect of all this, I think, is a new form of Puritanism that is slowly throttling our society.  The irony of the intolerant tolerant has often been noted.  But the problem goes far deeper than that:  it’s that as the expressions of our identity continue to expand, intolerance will continue to take a more visible form.  That mocha-frappacino is no longer just a drink  and your chicken sandwich now signals your values.  And once that game starts, then everything’s in play.  The end result will be that moral judgment will happen easier and faster than ever, and always without the benefit of a hearing.

There’s more to be said on all this, no doubt, including exploring more closely the reasons why politics and consumption are increasingly intertwined.  But if I am anywhere in the neighborhood of “right,” then it means that these sorts of boycotts will hardly be the last of their kind.

Update:  Two accessible and worthy books on the consumerism problem, written by two friends of mine.  Skye Jethani’s The Divine Commodity is a great treatment, and though it has a very different style Tyler Wigg-Stevenson’s Brand Jesus is fantastic as well.