NextHow scientific is the myth? Part I
Uncategorized 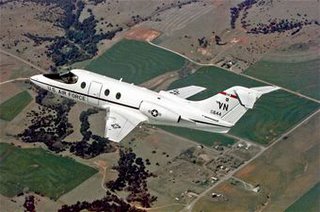 Last evening I stood before 75 to 100 of my peers while my flight commander announced what my next training aircraft would be. It came as no surprise to me to learn that I had indeed landed a spot with the 32nd FTS to be trained on the T-1 Jayhawk, with a future in cargo or air refueling ahead of me.

After a long and arduous struggle with my soul I had requested the T-1 as my first choice, even though I had the grades to compete for a coveted T-38 (fighter/bomber) slot. Yes, against the advice of countless bystanders, I rejected the route of instant coolness and chick magnetism for the less glamorous world of air transport. The decision wasn’t easy; it was the first time in my life that I willfully chose to not attempt the most difficult thing that presented itself in my path. However, once I realized that my sole motivation to fly fighters was simply to do the most difficult thing possible, the right decision was easier to see (even if no easier to make).

I ultimately chose the path I did after an evalutaion of my reasons for being in the Air Force. I entered the Air Force to serve America and defend the country that I owe so much to. I became a pilot to force myself to live in a world that is anything but comfortable to a small-town, conservative and arguably sheltered boy who is naturally more inclined to read Dante, Descartes, and the Bible than hang out at bars with a bunch of loud-mouthed and selfish heathens (it’s a stereotype, I know). I want to learn to be a godly, humble, and effective layman–simply a man among men, if you will–and, having a long way to go before becoming that, realized that it would be best to put myself in a position where I would have to either become that sort of person or else fail miserably trying. There is little room for fence-riding in the military–you either are strengthened by the challenge, or it destroys you as you beat a hasty retreat.

I can accomplish these goals just as well in the cargo world as the fighter world, perhaps even better as I will have more time and energy available–time and energy that would have otherwise been monopolized by trying to master flying a difficult aircraft. I know I would have enjoyed chasing the shouting wind along, flinging my eager craft through footless halls of air . . . for a while. In the long run, however, the fulfillment and joy would not be the same. I would have conquered something I didn’t really care about while quite possibly missing out on achieving the goals that drove me to pursue this career in the first place.