A few thoughts in response to Andrew:

Remember that a large percent of college students are at public institutions. (Does anyone know whether a majority are?) Although these schoos still have tuition, costs are highly subsidized by the government. Furthermore, for many students, college is an arena of more sophisticated partying and pranking than high school. Since public secondary education is designed to socialize young citizens, one cannot say that only in college does work toward contribution to society begin. In other words, I don’t see how college is any more praxis oriented than high school, given that both are preparation for praxis. 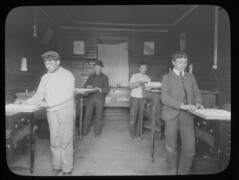 For some, the last two years of high school are idle because they could be doing bigger and better things (at college). For others, an eleventh and twelfth year of education are wasteful because they lack the ability to comprehend the subjects, etc. Personally, I would have liked high school to be more challenging, but I also learned a lot. I think that Honors and AP courses address some of these problems. I remember that for many of my senior class, their last two years were filled with fun and often vocational elective courses. We even had “short days” for students with enough credits. So the bifurcation of student-types that Selby made is accomodated in public education.

I spent some time in Germany a few years ago, and learned that students take tests in the early to middle teenage years. These aptitude tests determine the students remaining course of secondary education. For many, training becomes primarily vocational at this point, while others remain on a more academic track for professional, political, and academic vocations. A system like this seeks to make education as worthwhile as possible for all kinds of students. But I doubt that German schools give “Most Improved Student” awards like my schools did. In other words, one’s public education so locks one into his vocation, that there is little flexibility for a student to improve himself to the point of changing educational strata. To defend American education again, its democracy provides opportunity for students to succeed in spite of themselves or their backgrounds. For instance, the author was always a bright, though lazy, student who practically flunked the sixth grade before getting whipped into shape by his parents and teachers.

Wow. I just did it again.

Praises aside, I think the public educational system encourages mediocrity and reads all the wrong books. I still can’t understand why we read House on Mango Street and Of Mice and Men (two books I really like) at the expense of reading Paradise Lost or King Lear. I still don’t understand why WWI was taught to me as this skirmish that happened after a duke was assassinated. And I still don’t understand why Eurpoean History was substituted out of the tenth grade curriculum in favor a trilogy of classes on Health, Careers, and Driver’s Ed. I think that curriculum changes are more important to make than drastic structural changes. I think many of my educational deficiencies could have been avoided if I’d been assigned more and better work to do. The consequence of this is that ideological battles take primacy over practical ones (with which Selby is most concerned in his post).

This is just what this man of theoria likes to hear.