I’ve got a few thoughts over at Christianity Today about the “radical” subcurrent of American evangelicalism.  Only by “few” I mean 3000 words worth and by “subcurrent” I mean “tidal wave.”

Long, yes, but by no means complete.  There’s a good deal more to be said about the movement which I didn’t get to.  Unfortunately, some of the distinctions and emphases I tried to keep through got a little muted during revisions, in order to ensure I didn’t go on ad nauseum.  But that’s simply part and parcel of writing in that context.  The medium and the message end up coming together, necessarily, which you might say is part of the point of my piece. 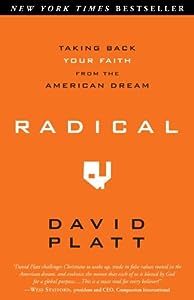 I should also say that I like a lot of what’s going on in the movement, which might not have come through as clearly as I wanted either.  David Platt’s work, particularly, is interesting.  Getting people together for long hours to read and study the Bible is always a good idea, for instance, though doing it over simulcast is a bit weird.

I won’t say anything further about it, at least not right now.  Go read the whole thing if you want or start with this small sample:

These teachers want us to see that following Christ genuinely, truly, really, radically, sacrificially, inconveniently, and uncomfortably will cost us. Platt wants to safeguard the distinctness of God’s saving work over and against our effort. But his primary concern is for the “outflow of the gospel.” This means “putting everything in our lives on the table before God” and being “willing to sacrifice good things in the church in order to experience the great things of God.”

The reliance on intensifiers demonstrates the emptiness of American Christianity’s language. Previous generations were content singing “trust and obey, for there’s no other way.” Today we have to reallytrust and truly obey. The inflated rhetoric is a sign of how divorced our churches’ vocabulary is from the simple language of Scripture.

And the intensifiers don’t solve the problem. Replacing belief with commitment still places the burden of our formation on the sheer force of our will. As much as some of these radical pastors would say otherwise, their rhetoric still relies on listeners “making a decision.” There is almost no explicit consideration of how beliefs actually take root, or whether that process is as conscious as we presume.

Or as dramatic. The heroes of the radical movement are martyrs and missionaries whose stories truly inspire, along with families who make sacrifices to adopt children. Yet the radicals’ repeated portrait of faith underemphasizes the less spectacular, frequently boring, and overwhelmingly anonymous elements that make up much of the Christian life.