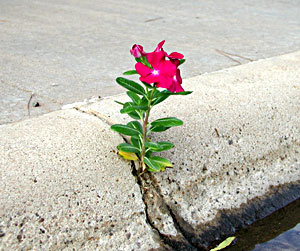 I walked the city tonight.

I walked the city tonight with eyes wide open and wept over what I saw. I went looking for life but saw death and pain and sin all around me.

Pavement beneath my feet. Pavement for miles on end. Rock, concrete, brick, plaster and stone enclose and entomb. The heart of the city must be cold, too, to survive in such a coffin. Why do I return to the city?

Neon signs blink, stammer, and beckon to the moths who have grown accustomed to the language of the night. Brakes squeal in protest as the city bus slides to a stop on the side of the mountain of Babel. The worn out discs aren’t the only thing protesting. A glance at the face of my waiter, the face of the man climbing the sidewalk towards me, the face of the musician, the barrista, the student, the street-dweller reveal that none of these understand stopping when it’s so much easier to roll on down the hill—so much easier to slide on down the line. Why do I return to the city?

…How much I hate myself…”

The anxious voice rises in cadence with the anguished music spilling out of the karoke bar before being lost between the tires and the roar of engines in the street. The voice reveals so much in just a few moments, though. There is a plea for acceptance; a tipsy bravado; a secret pain: all crying out to anyone who will listen. No one will, though. Not here, not now, not when brakes squeal every time you try to stop. And after a few more rounds at the counter it won’t really matter.

You know, there’s a bar just up the street and, maybe…”

A beautiful face tilts upwards, saucily returning the lightbulb’s electric glow. Here is youth and beauty, vivacity and confidence—a song in the voice and a sparkle in the eyes. It is the sparkle that makes my blood run cold. Looking, I see the eyes—wide-open, empty, and staring; they steal their spark from the street light overhead. They are mirrors, reflecting the world to itself while the person remains hidden. They seem more like shutters to the soul than windows. I realize the voice lilts so that it will not fail; extremes are the norm in a black and white city.

I can’t stand the city: too many people with too many problems. Give me the countryside any day. Why should I have to deal with them?”

Trans-atlantic crossings provide opportunities for many questions and many conversations. Sitting across the cockpit from the other pilot I wasn’t sure of the right answer to give. We had just catalogued the numerous problems of the current generation: drug-addiction, video game zombies, massacres, laziness and decadence, broken homes, broken hearts, selfishness, and greed. He advocated leaving it all behind. People were problematic anyhow, full of themselves, rushing from place to place, and continually sliding down the hill to avoid the squeal of worn-out brakes. The countryside offered a new chance; an opportunity to start over and get it right.

His question with its implied answer bothered me. It bothered me because of its hubris. After all, the countryside is really just a place for the self-righteous to create new cities, even if they are only cities of one, two, or a few. Why do I return to the city?

My thoughts tumbled around in my head as I hurried along the sidewalk towards home. So much pain and ugliness in the city. But as I stumbled home, pressed down by the sadness I had seen, my foot struck broken piece of concrete. Looking down, I saw that there was a crack, a bump, a split in the sidewalk large enough to trip an absent-minded man. Intrigued, I followed the broken line of concrete that spanned the sidewalk and trailed off into the grass. And it was there, in the grass lining the boulevard that I found my answer. I was standing at the foot of an oak tree that I had grown and stretched out its roots in all directions, and in all directions it had broken the sidewalk, the pavement, and the street. The city couldn’t contain the life that was throbbing through the trunk of the tree.

Why do I return to the city?

I return because it is here that there is life and as long as there is life there is hope. Yes, the city is hard and cold, but so was my heart at one time. And then I met Someone whose life was so great that even a stone sepulchre could not hold him. Like the root of the oak tree, nothing could contain the power of His life; and He has given that life to me, life that is even now cracking and splitting the cold and stony shell of my heart to make room for the life that grows within.

I walked the city tonight.

I walked the city and caught a glimpse of its heart.