Three (Quick) Things we can Learn from Harold Camping

In religion, as in sports, the truism holds true: we learn better from the failures than the successes. 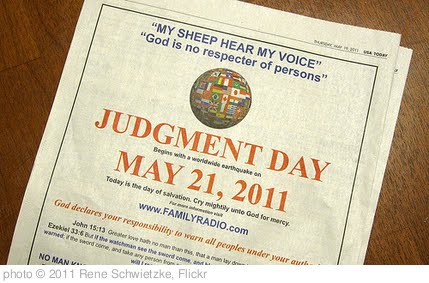 As thousands of Harold Camping followers put the pieces back together—of their hearts, their faiths, their life savings—again, many are enjoying mocking his second failed attempt to predict the Rapture.

Avoiding both the snide laughter of cynicism and fraught tears of depression (two twin faces of despair), we should redeem all things and focus on what is pure, honorable, and good.  Here are three quick lessons, then, we can extract from the last few months’ embarrassing events:

#1. Knowing church history can save you time, money, and pain.

G.K. Chesterton succinctly said that Christian orthodoxy was ‘practical as potatoes.’  Traditional Christianity is a wealth of wisdom, not only the timeless doctrines, but the timeline of experiences.

It’s just plain helpful to know what the church has done in the (distant and recent) past.

Even if tradition is not always right, it can help us intelligently set our bets for good odds. Evangelical Christians are rightly wary of Tradition with a capital “T”, lest it dare to usurp God’s Word. But all Christians can and should be nourished by church history, just as they learn last week’s news, or the history of the United States, or of Europe, Rome, Greece, and the world.

The past may not determine the future with certainty, but it does often help us predict it with accuracy. The history of the church may not be devoid of errors, but we can learn a lot from the errors that people made — and that people are likely to make again.

Since the 1700s, dramatic shifts in Protestant thinking about end-times have led to several bouts of “date-setting” (calculating the return of Christ). After the Reformation encouragement to ‘take up and read’ the Scriptures, some Christians conceived idiosyncratic interpretations that, full grown, became false prophecies. Emanuel Swedenborg, the Millerites, Charles Russell, and many more have indulged in guessing (divining?) when Christ would return. They have all been, thus far, wrong.

Date-setters of years past have almost all responded to their incorrect prophecies by either returning to their calculations and date-setting again (like an alcoholic returning the bottle) or “spiritualizing” their prediction. Camping chose both. Many people act surprised that he didn’t “apologize.” To be fair, it should have been expected.

An awareness of  the past would notify us, firstly, that Camping will probably turn out to be wrong, and secondly, that he will probably date-set again. He was indeed mistaken about May 21 being “an invisible” day of judgment.  Which brings us back to lesson one: We knew he’d probably be wrong about October 21, 2011.

#2. Even if some man knows the day or hour Christ will return, I personally (probably) don’t.

The second lesson we can learn from the Camping situation is not to be too sure, lest our surety leave us under-prepared for the second coming.

The traditional view about the second coming (to say nothing about pre-trib, post-trib, etc.) is that Jesus’ return will be unmistakable. Now, the first coming was not very obvious. After all, it took some of his disciples months to recognize that he was the Christ. So I wonder whether I can be absolutely certain whether the second coming will be frighteningly, startling, undeniably easy to recognize. I’d like to play it safe and remind myself that “many will be deceived” so I can be on my best guard.

The elephant in the room is when Jesus says, “But concerning that day and hour no one knows, not even the angels of heaven, nor the Son, but the Father only” (Matthew 24).

Maybe someone can wiggle out of the immediate interpretation of this verse and say that no one knew back then, but now we know, somehow. So let’s give that argument a hearing:  if some brilliant prophetic man learns the day and the hour, what makes me think I will be able to tell he’s right? With so many boys crying wolf, how will a non-prophet like me know who to trust?

A dose of healthy doubt is probably the best bet. Unless I can personally check his math (Camping’s math remains deeply inscrutable to me) I have to go on the latest date-setter’s word. With history and tradition on my side I know they’re probably wrong, but even if they aren’t, it would be prideful of me to assume I know which date-setter is right. So the second main lesson is that, for all practical purposes, we should live as if no man knows the hour.

Without personally knowing the hour, without being ignorant of church history, the only conclusion is this: I must be prepared daily. That’s the beginning and end of this Harold Camping madness. The next date will and there will be another swell of emotion, fear, laughter, hope, anger, cynicism, and many dollars spent–or maybe Jesus will return tonight.

James reminds us not to say ““If the Lord wills, we will live and do this or that.” To do otherwise is to “boast in arrogance” (James 4). So Camping’s next day may not arrive. Either way, Maranatha!

When the next false prophet arises, I think we can thank God for another reminder that he may return today. He is coming quickly! I must repent, believe, forgive others, pray without ceasing. The vigilance that the “end is near” has kept the church awake and alert since the day Jesus ascended, and so it must continue.

The rule to stay alert and be prepared applies equally well to non-Christians, by the way, for whom death must inevitably come. For Christians, Jesus may return today. For non-religious folk, the Christians may be right. Either way, my personal death will be my own Last Judgment, and when that day comes, is there any difference?

“See how the farmer waits for the precious fruit of the earth, being patient about it, until it receives the early and the late rains. You also, be patient. Establish your hearts, for the coming of the Lord is at hand” (James 5).

Keith E. D. Buhler is a speaker, writer, and classical educator at the Torrey Academy with Biola University. He can be contacted at keithedbuhler@gmail.com.