NextJackson and Tolkien: Hollywood’s Infatuation With Angst
Theology and Practice

What problem does believing in Jesus solve for you?

We often think of “orthodoxy” as the right answer, but what about the question itself? What if orthodoxy has more to do with having the right problem? The right problem would have to be one to which Jesus is the unique solution, not a merely adequate one—the acceptable answer, not an acceptable answer.   A human problem Jesus solves uniquely provides the ground to stake the orthodox claim about Jesus: he is the only way. A problem Jesus solves adequately is the wrong problem because an adequate Jesus is the wrong Jesus.

For people who don’t believe Jesus solves anything uniquely, Christianity is just a benign option. Sure, Jesus can get us through the day, motivate us to help with poverty, provide a social ethic, or resolve intellectual problems. But people use many things to get through the day (including coffee). Indignation motivates crusades against poverty. Pick your social ethic. Theory solves academic problems. While Jesus can solve such problems adequately, an adequate Jesus inspires nobody. So long as people have the wrong problem, they will have the wrong Jesus. 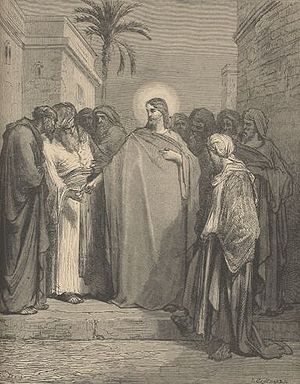 Dispute of Jesus and the Pharisees over tribute money (Photo credit: Wikipedia)

What is a Problem?

Problems are encounters we interpret as inconsistent with our cognitive model of the world (how we think the world works). We reckon with life by assessing our priorities, expectations, and concerns against our model, and a problem is the gap between what we observe and what we expect. Our models thus set up problems that structure the solutions we seek. And there are only two kinds of models: one centers our perspective in the problem whereas the other displaces it.

Some people tend to treat the world as revolving around their perspective—their concerns, priorities, and issues—and thus make their perspective (ego) central to their interaction with the world. Let’s call that the “ego-centric model.” People with ego-centric models tend to identify their problem with the scope of their world’s problem—their country, social circle, or individual life—and scale solutions to fit that scope. Their faith in God is upheld by a theology scaled to resolve those problems.

Others tend to treat the world as displacing their perspective, and thus adopt a posture of openness to new experiences that subvert their perspective. Let’s call that the “subversive model.” People with subversive models tend to invite new encounters that subvert their problem with bigger ones—perhaps on missions trips or in philosophy class—and expand their world in the direction of a bigger solution. Their faith in God opens them to bigger problems that destabilize their theological constructs.

These two models shape the problems we have, which in turn guide our theologizing about Jesus. Theology is how we integrate our beliefs about Jesus into our lives, how we “make solutions” out of him. But using theology to fit Jesus into our problems is a tricky business because our theological constructs are obviously not Jesus himself. They are what we use to get at him, which calls for two caveats: 1) constructs are tools for knowledge, not the object of knowledge itself; 2) we must loosely hold answers that result from our theological constructs. They are the output while models are the input. Thus, replacing theological constructs amounts to replacing answers: our underlying problem—what motivated our interest in looking to theology—remains.

People change problems when they adopt subversive over ego-centric models of the world.

Changing models is ultimately a way of discarding an adequate Jesus by discarding the wrong problem.  Subversive models make us vulnerable to encounters that overturn our understanding of Jesus, surfacing how we use him for solutions and answers we want to get. But that means we must seek such encounters and learn to recognize when we’ve had them. Don’t get me wrong:  I’m not saying that our personal experience norms the truth, but that the truth norms us only by our experience of it.

Jesus himself performed ministry this way.  He entered the world in a moment of culture war. Competing ego-centric constructs about social problems filled first century Palestine. Pharisees claimed their problem (cultural decline) was the scope of their world’s (Israel’s) problem. Laxity in observing holiness had precipitated Israel’s decline, and so Pharisees wanted to hallow the land because Yahweh was holy: “You shall be holy, as I the Lord your God am holy.” To correct the broken link between God and their world, they proposed a solution of personal and national holiness. And so they responded to Roman subjugation with a rigorous morality, emphasizing barriers between people along an axis of holiness.

Jesus confronted the culture war around him by subverting the boundaries of the Pharisees’ solution by enlarging their problem. Jesus criticized the ceremonial, social, and ultimately exoteric spiritual barriers of their holiness program while enlarging the formal principle—and problem—of holiness. “It is not what enters the mouth that defiles a man, but what proceeds from the heart” (Matt. 15:11). He dedicated his ministry to breaking down spiritual camps and advocated an alternative vision of human community, which was rooted in compassion on all groups that violated the barriers of each (as seen in the Parable of the Good Samaritan). He dealt with people’s hearts—their ego-centric models—by showing that their accepted problems were too small.

Jesus subverted people’s theological constructs by solving a problem different from cultural decline. He stressed that God’s compassion solved the right problem, while the culture war of the Jews’ holiness code impeded people from discovering it. Our enemies are not the right problem, so defeating them is not the solution. This is why we turn the other cheek to those we consider evil and love those who impede our solutions. Only after people confront the bigger problem will Jesus’s solution seem real enough to accept. How does someone get to the place of having a problem for which there is either no “adequate” solution for anyone, or one unique answer for everyone?

The right problem can be found by displacing our ego from the accepted problem of each of our worlds, narrowly considered. The right problem demands that we expand our world until it encompasses everyone equally. We must all be in the same camp: in other words, we must confront a universal human problem, rather than the problems particular to our concerns, club, or country.

Jesus devoted his ministry not to confronting people with sins and absolving their transgressions, but to proclaiming a kingdom through healing and raising the dead. Of 47 encounters Matthew records between Jesus and the “multitudes” and Pharisees, 28 involve healings or discourses about life and death, but only two involve sin or forgiveness. In Mark’s account, 22 of 38 encounters recorded involve healing and life, while only four mention sin. In Luke, it’s 23 of 43 encounters with four mentions of sin. In John, it’s ten of 20 encounters with four mentions of sin. Jesus’s own response to faith was never, “Your faith has made you sinless,” but “Your faith has made you well.” Death is the fact of sin, and sin’s reality is death.

Death is the Orthodox Problem

Jesus saw himself as solving death uniquely with life. His mystical teachings always center on his ability to impart “true life,” “everlasting life,” and the “life eternal,” to anyone who believes, and contemplated his own flesh as the solution given “for the life of the world,” according to John’s account. Matthew (10:39), Mark (8:35), and John (6:53) all record Jesus teaching that anyone who rejects him and clings to their own life will have no life.

The church fathers’ true north in the Christological controversies was a Jesus who solved genuinely the problem of death. He had to partake fully in divinity, fully in humanity. He had to have both natures, both wills. Only then could God become man that man might become god, in the words of Athanasius. Humanity only then could partake of the divine nature (2 Peter 1:4) through mystical union with Jesus and share in the spoils of his victory over death. The subversive theology of the Incarnation uniquely solves the orthodox problem of death.

Sure, Jesus can meet you where you are and solve the problems you have. But spiritual growth consists in embracing the problem of orthodoxy, and effectively challenging the world spiritually consists in confronting it with death. The orthodox solution is joy unspeakable and full of glory: Jesus came to be the life of the world. And not the sort of life lived as passing through events—as the times crease into our faces—but the positive force of life of being and doing in flourishing relations with others under the expectation that our death is conquered and is the curtain call for the real show.

Nathan D. Hitchen is a professional problem-solver who lives and works in the Washington D.C. area with his wife, and is a 2007 John Jay Institute fellow.