Since the election, conservative evangelical handwringing over the future has reached something of a fevered pitch. Al Mohler has been the loudest voice, pronouncing the election a “disaster” for social conservatives, a point that was repeated by my friend Denny Burk.  And then Mohler repeated the point for the NY Times.  I could dig out the lamenting tweets I’ve seen, but frankly I haven’t the time.  My friend Gary dubbed it “freak out panic end of the world despair,” which to me about sums things up.  Your mileage might vary.

What should we make of all this?  How about a list, since we haven’t had one in a while.

1)  The willingness to dub this a “disaster” actually reinforces the identification of evangelical conservatives with Republicans in the public square, an identification that seems like is bad for everyone involved.  I mean, on the one hand you have a lot of younger evangelicals who are very frustrated with the old guard for their rather unsophisticated approach to political engagement.  On the other hand, the Republican party isn’t exactly in great shape these days.  And they’ll almost certainly figure out a way to blame social conservatives for all this anyways.  So it does conservative evangelicals no good at all in the aftermath to be among the loudest voices shouting about how bad it has all gone and functionally blaming a shift in social issues for the losses.

2)  It actually may be a pretty unsophisticated analysis.  Folks like my friend David Sessions will presumably suggest that this point is merely clinging to the flimsy pieces of evidence that everything isn’t as bad as all that, but it’s worth noting even for that.  As Matthew Schmitz points out, social conservative issues actually did better than the candidate who we somehow dubbed to represent them.  How does that fit the disaster meme?  Also, turns out that on the Presidential level a disastrous get-out-the-vote effort by Romney’s team had who knows what sort of political effect.  While Mohler dubbed this election a “seismic moral shift in the culture,” that presupposes not much had gone on in America since in between the last election.  And that this election happened out of nowhere.  The reality is that this game has been afoot for a while, and taking one election and responding like this simply confirms for most people how out of touch conservative evangelicals actually are.

3)  Okay, though, I get it.  I mean, I said it was bad and said that conservatives should probably get ready for a long series of defeats.  And here’s the thing:  I meant that.  Like, really meant it.  From what I can tell, the Republican party is so soulless right now that their main pundits are already in the process of flipping on illegal immigration in order to win votes.  Now, whether we think “amnesty” or what have you is the right position is currently not my concern.  My point is simply that they are obviously so desperate to return to power that they’re willing to hack away at their principles to get there.  And that’s supposed to win trust back?

4)  Let’s run through that last point, just a bit more.  We’re being told repeatedly right now that conservatives need to “reach out” to Hispanics. From what I can tell, the desperation amounts to little more than pandering of the very worst sort.  We might as well wear a sign and shout that we need votes and we don’t quite care what it takes to get them.  You can make a case for pandering as a matter of political expediency.  But in an environment where a party already has no credibility, I fail to see how hasty reversals of its positions one week after losing an election is going to build any at all.  Ross Douthat in his judicious Douthatian way called that notion into question.  I might go a step further and have a hearty laugh over it.  I mean, we just nominated someone who elevated pandering to an art.  And how did that go for us?  But all of a sudden, many of the Republican pundits are suggesting we should all follow suit or we shall all experience doom (the same argument, we should all remember, that was foisted upon us as the reason to vote for Romney).  Turns out, we truly nominated the candidate we all deserve. 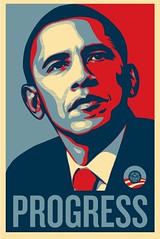 What conservatives need is someone who can speak with authority about conservatism, who understands it well enough that they can cheerfully and graciously interact with those who disagree with us and win them to our team.  But that sort of public speech only comes if we understand our positions to the bottom and have the firmness of resolve that comes from believing they are genuinely true.  And if we can’t reach that point, then we ought to change ‘em anyway—but not for the craven political end of securing votes.

5)  It was said early on that this was a “status quo” election.  And it was—for evangelicals and for conservatives.  In their response, they seem to be standing by the status quo of viewing politics as the most significant cultural bellweather on the one hand and of privileging the acquisition of political power over principles on the other.  It’s an unholy mess and unbecoming of our leadership.

What people want is not handwringing when things don’t go “our way,” but hope.  And a sober and serious assessment of how things look along with something like a strategy to turn them around that stays true to our principles.  Or maybe I speak too broadly.  So let me narrow the scope:  that is what I want from an evangelical leadership, not the sort of handwringing that we are currently experiencing.

Along these lines, let me highlight this bit from Peter Leithart’s fine piece:

Yet conservative Christians have much to die to. Not least, we have to die to a rhetorical style and a public posture. The media exaggerates the crankiness of religious conservatives, but they are exaggerating something real. Does the frenzied tone of Christian commentary manifest confident Christian faith? I don’t remember that Jesus said, “You shall know them by their fear.”

In the suggestion that this election was a “disaster” for social conservatives lay the seeds of fear and the beginnings of a less-than-cheerful oppositionalism to the President’s policies for the next four years.  But we as Christians are called to a politics of hope and that must frame our public discourse.  Not the sort of sentimentalized bastardization of hope that attaches it to the rise and fall of political, social, or moral orders.  But the hope that endures well beyond them, that cheerfully faces a world that is hardly to our liking and entrusts our children to the providential care of the loving and triumphal God.