NextThe Possibility of a “Third Thing” Between Society and Biology
Literature

Soils for the Seeds of Doctrine: Chesterton’s Orthodoxy as the Antidote to Modernity

I have always thought that every academic–or wannabe, like me–ought have one or two hypotheses that are held very loosely, are somewhat defensible but impossible to prove, and just fringe enough to make academic parties interesting.

One such hypothesis that I have occasionally advanced is that G.K. Chesterton’s Orthodoxy is the most important work of the twenty-first century, even though it was written in the twentieth. 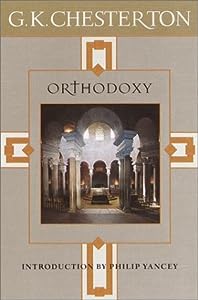 Though Chesterton attained more fame during his life than C.S. Lewis—he was greeted by massive crowds on his trips around the world—by the beginning of World War II his position as chief apologist and defender of the faith had been taken over by Lewis. In particular, Chesterton’s influence on American evangelicalism has been relatively non-existent compared to Lewis’s.

And no wonder: Lewis’s Mere Christianity, which has influenced numerous evangelical leaders over the past few decades, is a masterfully written apologetic. The discovery of Lewis helped many evangelicals in the 1950s, 1960s, 1970s, and 1980s realize the importance of having a faith that was as intellectual as it was spiritual.

Yet the situation within evangelicalism (and without) has now changed, and Mere Christianity is an apologetic suited to its time. While evangelicals have made strides in recovering the life of the mind, it is now en vogue to criticize evangelical Christianity as too propositional. The new generation of post-modern evangelicals is moved more by the story of Christianity than its ideas, and more prone to appeal to the imagination than the intellect.

Such critics would do well to consider Orthodoxy.

Though it was written just over 100 years ago, Chesterton’s finest work is still relevant. In a First Things‘ article, Ralph Wood writes:

Indeed, we might say that the last century belongs to Chesterton–for in that now one-hundred-year-old book, Orthodoxy, he remarkably prophesied the ailments of both modernism and postmodernism, while adeptly commending Christianity as their double cure.

Wood’s article highlights Chesterton’s criticism of the “twin insanities of hyper-rationalism and hyper-emotivism,” and Chesterton’s response to those insanities (imagination and the “Doctrine of Conditional Joy”). But while his analysis of Chesterton’s argument is exactly right, his treatment neglects Chesterton’s method. Chesterton’s poetic-prose articulates a vision of Christianity that is as artistic as it is analytic, and as such is a more effective antidote to the prevailing post-modern sensibilities than any other book I have found.

Before he considers the tenets of Christian theology, Chesterton defends four propositions: “I felt in my bones, first, that the world does not explain itself . . . The thing is magic, true or false. Second, I came to feel as if magic must have a meaning, and meaning must have some one to mean it . . . Third, I thought this purpose beautiful in its old design, in spite of its defects, such as dragons. Fourth, that the proper form of thanks to it is some form of humility and restraint: we should thank God for beer and Burgundy by not drinking too much of them.”

It is somewhat misleading to call these ideas propositions for Chesterton, or evenideas. Rather, he describes them as the “ultimate attitudes toward life, the soils for the seeds of doctrine.” Earlier, he speaks of the “sentiments of elf-land.”

Chesterton’s case for this ethic is surprisingly poetic—one might even call it artistic. He rejects sociology or even the principles of natural law and instead appeals to child’s experience of fairy stories as his justification. Yet beneath the apparent triviality is a surprisingly sophisticated aim (this dynamic frequently occurs in Chesterton): Chesterton understands that persuasion is as much sentimental as it is rational. By articulating the “Ethics of Elfland,” he lays the poetic foundation for his defense of Christianity, which will come in the following chapters. Chesterton wants to convince your mind—but he wants to woo your heart as well.

Chesterton’s Orthodoxy, then, differs from Lewis’ Mere Christianity precisely in its attempt to ground Christianity not in the propositions of natural law, but in the elemental human and artistic experiences that we begin to neglect as we grow old. It is an attempt, dare I say, to defend and engender a faith that exudes wonder and astonishment at the mystery of reality. But Chesterton had told us as much at the beginning. Orthodoxy is not a “series of deductions,” as he says at the outset, but an attempt “in a vague and personal way, in a set of mental pictures, to state the philosophy in which [he has] come to believe.”

It is this approach that I would argue is perfectly suited for our post-modern age. Chesterton is the anti-Nietsche—a poet-philosopher who understands that unless truth exists, the enterprises of art and beauty are rendered meaningless. What’s more, his method is consistent with his argument: he artistically defends the existence of the truth and grounds Christianity in the pre-rational experience of story without jeopardizing truth’s existence or fallaciously opposing reason and emotion.

In sum, though Orthodoxy has only recently turned 100 years old, it remains the single most effective articulation of a Christianity that is intellectually robust, artistically engaged, spiritually sensitive, and historically grounded that I have yet read.

[Note:  This is a slightly revised version of what I posted previously at Evangelical Outpost.]