Mark Regnerus recently published a new study comparing children raised within traditional marriages with those who were not.  The study has generated a bit of discussion as people have attempted to sort out what it all might mean—or not mean—for marriage policy discussions.

In one sense, reports like this are an excellent litmus test for whether we are able to overcome a built in confirmation bias.  I have, as someone who supports traditional marriage, all sorts of reasons to believe that children are better off not only when raised in a stable household, but a stable household with a mom and a dad.  If nothing else, it’s an article of faith, a plank that gets built in once we allow ourselves to be shaped by revelation. 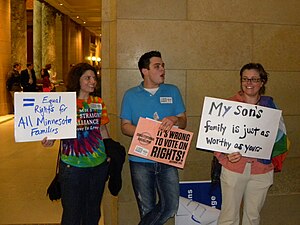 English: Protesters gathered inside the state capitol building in St. Paul, Minnesota, to protest against the upcoming vote by the Minnesota House of Representatives to put an anti-gay marriage amendment on the 2012 election ballot. (Photo credit: Wikipedia)

Yet this study doesn’t seem like it proves nearly as much as someone like me might have hoped.   The definitions, for instance, that Regnerus uses seem a bit unsettled, and if nothing else his categories of “Gay father” and “Lesbian mother” don’t have much overlap with the images that most folks have in their minds of gay couples (whether those images are themselves representative is an open question).  As Will Saletan points out, Regnerus practically grants the point, suggesting that children of gay couples today would be planned out much more carefully than even twenty years ago.

Which means, simply, that we ought be very careful before deploying this study in an argument amongst friends.

Simply put, we may know that the optimal environment for a child is a stable home with a loving father and mother.  But we don’t quite know that on the basis of this study, nor are we able to assert the corrolary that has become for conservatives the social scientific holy grail:  that children who are raised in stable homes with gay or lesbian parents are less well adjusted.

That doesn’t mean we should sit around and wait for the social sciences to tell us one way or the other.  We don’t need an empirical study to tell us that a generation that smokes marijuana three hours a day will be a less productive one than that which does not.  Rather, it simply means that we ought not be beholden to the social sciences for our argumentation, as those who argue for gay marriage (as they are wanting us to demonstrate a quantifiable harm) sometimes seem to suggest we should be.