I’ve always loved Independence Day, for a lot of reasons but chiefly for the nostalgic memories it evokes of childhood (sparklers, barbecues, blockbuster movies, swimming pools, popsicles) and the celebratory community it cultivates among Americans. Divided though we may be along red and blue state lines, most are joined in at least the basic sentiment of thankfulness on this day: for freedom, for apple pie, for a day off work. If not everyone experiences this day as an expression of patriotism, they at least enjoy it for the hot dogs and corn on the cob.

American Patriotism of the sort often exhibited on July Fourth–and also before sports events, at some elementary schools before the day begins, and in most country music–has for some people become rather gauche and vulgar. To these skeptics, patriotism is brash and unbecoming, something associated with “freedom fries,” yellow ribbon militarism, Toby Keith, guns and George W. Bush. Patriotism is simply an emotionally manipulative arm of nationalism, they suppose; a dangerous ideology that can fuel reckless foreign policy and unseemly cultural arrogance.

While some of those criticisms are valid (to be sure, patriotism has at times throughout history been used to galvanize nations around dastardly plans and policies), I think it’s a mistake to assume that a) patriotism is the same thing as nationalism, and b) patriotism is a manufactured extension of hegemonic ideology. 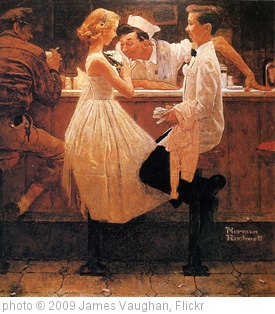 Patriotism is more existential than ideological, I think. It’s less about propagandistic justification for “exceptionalism-oriented” foreign policy (though it can be this) than it is a natural feeling of admiration and nostalgia for the place we call home.

It’s the thankfulness we feel for the particular nuances of the world that reared us: the culture (in America: jazz, baseball, the national parks, pretty much everything Ken Burns has documented in his films), the history (1776, Abraham Lincoln, Buzz Aldrin and so on), the landscape (for me: the windswept prairies and thunderstorms of Middle America), and the people (our parents, our teachers, the kids we played with in the street).

Patriotism is a good thing. It’s the natural emotional connection we have with place. We’re wired to ache for this notion of “home.” It’s what the Israelites longed for in the Sinai. It’s what the Hobbits longed for (the Shire) during their Middle Earth adventures. It’s what constitutes part of C.S. Lewis’s Sehnsucht: a nostalgic longing for the “Green Hills” of his Belfast childhood, “the low line of the Castlereagh Hills which we saw from the nursery windows.”

Yes, patriotism is provincial and “self-focused.” Necessarily so. Everyone has a different place they call home, a different assemblage of culture they treasure. The diversity of patriotisms (American patriotism vs. Swedish patriotism, for example) does not need to be thought of in terms of competing patriotisms. Rather, it should serve as an affirmation of the richness and complexity of culture and a celebration of the diversity of God’s created world. It’s natural to feel that “my country is better than yours!” and it doesn’t have to be a bad thing. If no one felt this pride, the Olympics would be a snooze and Disney World’s EPCOT Center would be far less interesting. When I travel to a foreign country I want the people I meet there to take pride in their country and culture. If I went to Switzerland and the Swiss citizens I met insisted that their chocolates, mountains and watches “were nothing special,” I’d be hugely disappointed.

Lewis wrote in The Four Loves that a healthy patriotism is based on a love of home and “is not in the least aggressive.”

It asks only to be let alone. It becomes militant only to protect what it loves. In any mind that has a pennyworth of imagination it produces a good attitude towards foreigners. How can I love my home without coming to realise that other men, no less rightly, love theirs? Once you have realised that Frenchmen like cafe’ complet just as we like bacon and eggs–why good luck to them and let them have it. The last thing we want is to make everywhere else just like our own home. It would not be home unless it were different.

And so this Independence Day, I’m not going to feel bad about my pride in America. I’m not going to shrink from patriotism, as if it’s anything other than a natural and good thing to feel. I will be careful not to confuse it with nationalism, however, and will not forget the fact that as Christians, “our first love must be the kingdom of God, over and above any love of country, no matter how pure and honorable that love might be.”

Ultimately my fondness for “home” and all of its nostalgic resonances–Gettysburg, Old Faithful, college football tailgating, Norman Rockwell, Kansas City barbecue, cherry cobbler–should point me heavenward, stirring my heart but not satisfying it, stoking the fires of Sehnsucht just as the Irish green hills did for Lewis.