Homosexuality, Sojourners, and Me

Sojourners Magazine has a piece up today about the shifting attitudes toward homosexuality among many young evangelicals.  I sound the conservative note in the piece, though it comes out a bit warbled:

Still, it seems that for the majority of millennial evangelical Christians, loving one’s gay neighbor doesn’t necessarily mean an immediate endorsement of marriage equality or explicit support for LGBT rights. Matthew Lee Anderson, 30, is a Christian writer in St. Louis, Missouri, who identifies as a millennial evangelical with a more broadly conservative view on public marriage. Anderson believes that evangelicals in support of same-sex civil marriage are naive about the negative ramifications of trying to separate the religious view of marriage from the governmental view of marriage, although many evangelicals and others are convinced that this is the best way forward on the issue. 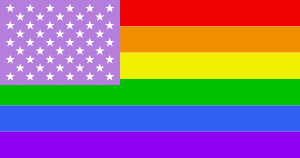 A variant of the rainbow flag, symbolizing the gay rights movement in the United States. (Photo credit: Wikipedia)

“I’ve faced opposition from younger evangelicals who really want to view this distinction between the religious conception and the governmental conception of marriage as a solution to the culture wars, but I’m skeptical,” Anderson says. “I think if you look at what’s going on with the Catholic Charities shutting down [their adoption services in several cities] because of anti-discrimination laws, that strikes me as a very tangible point of genuine conflict between the religious and governmental conception of marriage.”

Anderson does believe, however, that the conversation between conservative evangelicals and the LGBT community is shifting toward a more civil dialogue of mutual friendship and open communication. While he is careful to emphasize that a “let’s get along” approach could lead young evangelicals toward what he considers a too-loose policy position on same-sex marriage, Anderson appreciates the new generation’s emphasis on friendship as a civic virtue. “We’re willing to talk to each other, and we can create space for a less hysterical understanding of homosexuality in the public square,” Anderson says. “That’s not a policy solution, but I would say most younger evangelicals want to root their public engagement on this question with that relational approach.”

In addition to the above, I’d also note that I think that as a natural institution marriage can be defended in public on non-theological grounds.  We’ve made a go of that discussion in the past here at Mere-O, and we doubtlessly will again.

My point, which I garbled badly in the interview, is simply that the optimism about “getting the state out of the marriage business” as a solution to all this seems to me unfounded and potentially naive about the negative ramifications for the many services that religious bodies provide and the many freedoms that they enjoy.

Update:  As if on cue, a friend sends along this link about a legal academic who is arguing that tax exempt status should be removed from those religious institutions that discriminate on the basis of sex.  Which is simply to say, this question has all sorts of ramifications for churches and ministries that Christians should think very carefully about before jumping on board the gay marriage ship.