Check out the interesting book review brought to us by Books and Culture. The book reviewed is a Hitler and the Power of Aesthetics in which Frederic Spotts argues that the “will to power” and aesthetic sensibility of Hitler are what continue to draw us to him.

It raises a number of crucial issues: 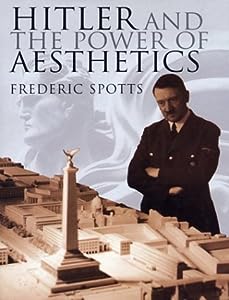 Cover of Hitler and the Power of Aesthetics

1) Hitler understood that he was not fighting a war, but building a culture, and a necessary component of that was the arts. He seems to have understood that what captivated people was not simply ideas, but ideas expressed in art, and he used this to his advantage. The German intellectual tradition from Hegel to Schopenauer and Nietzsche centered on both the will and aesthetics. One does not need read very much Nietzsche to discover this–his writing style is more poetical than philosophical. However, the supremacy of the “will to power” and the rejection of transcendentals clearly had devestating results. Aesthetics divorced from truth leads to propoganda and manipulation, as Hitler’s regime clearly demonstrates.

2) Jean Bethke Elshtain (the reviewer) seems disconcerted that Hitler was not a “yokel.” Why should we expect him to be? He nearly conquered the world, something that the “yokels” I know (I am one!) are not concerned with at all. Few of us are even very concerned with conquering ourselves. The story of Hitler illustrates that “yokels” do not do very much damage or very much good–it is men who are large souls, men with strong aesthetic sensibilities who do immense amounts of good or evil.