The Supreme Court’s decision yesterday on health care reform launched a tidal wave of commentary and opinion that captivated, if only momentarily, discourse among even casual observers of American politics.  The ruling was expected to be momentous, but the surprise twist of Chief Justice Roberts acting as the deciding vote busted up everyone’s expectations and sent the conversation spinning.

I’m still sorting out my own thoughts on the opinion, wavering between the “political genius” interpretation that puts Roberts (potentially) in the league of John Marshall and the “he simply got it wrong” camp.

It’s fascinating, though, how Roberts was caught between two principles of modesty that proved ultimately irreconcilable.  For one, Roberts (it seems) decided to protect the Court’s legitimacy by working, as much as possible, to defer the work of governance to the other branches.  But Roberts’ narrow understanding of the commerce clauses’ powers was also rooted in an interpretative modesty, an unwillingness to expand the reach of the government’s ability to coerce beyond that which had been previously established.

Ultimately, the two couldn’t stand together:  in order to maintain the court’s legitimacy, Roberts sacrificed his interpretative modesty and–as Alito and the rest argue in their dissent–innovatively argued that the law’s penalties for not purchasing health insurance constitute a tax. 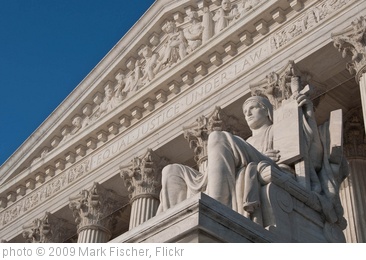 That’s a neat solution, a way of cutting through the gordian knot.  But prudential decisions of this sort are invariably accompanied by significant collateral damage.  To pick a non-legal example, when Bush first bailed out the banks, he invariably sacrificed conservative principles for the sake of our financial institution’s ongoing existence.  It’s easy in retrospect to criticize him for it, though we sometimes forget just how precarious things were (and, I suspect, few of us actually really knew just how dire the situation actually was).  Subsequent bailouts hardened our opinion against him, and understandably so.  It’s one thing to give an alcoholic on the battlefield a shot of whiskey before surgery.  It’s quite another to keep it flowing once the fellow’s on the mend.   That simply to say, though, momentary prudential concessions have their way of eventually being formalized into new doctrines.

That’s especially true, of course, within an institution that operates self-consciously on the grounds of precedent.  The question for the court going forward will be whether the expansion of the government’s powers of taxation is worth the cost of maintaining its legitimacy as a non-partisan institution.  Holding on to legitimacy this way, by offering a strained reading of the law, is potentially the sort of Faustian bargain that may go no better than it did for Bush.

Along those lines, though, my friend Josh Hawley suggests that turning the law into a tax includes conditions that prevent it from similar arguments being made in the future:

This is why: Roberts does not say that the government may now regulate anything it likes by calling the regulation a tax. He says this mandate can be read as a tax in these circumstances — that is, in light of the fact that it would be unconstitutional on any other ground and the court is supposed to avoid finding statutes unconstitutional if it can — and on these grounds: because it is administered by the IRS through the tax code and operates in many respects like a normal tax. Only if future regulatory schemes can meet all these criteria would they be valid under the taxing power. Yet Roberts does not give a single example of any such scheme — and we know for a fact, because they have told us repeatedly, that members of Congress would never have voted for this regulation if they had believed it was a tax.

That’s an interesting point and as a matter of political prognostication that may be true.  Josh is smarter than I and I’m inclined to defer.  However, it’s not implausible that future controversial bills will follow the course that this one has gone through–being advanced in the court of public opinion as “mandates” or what have you, and the defense that they are taxes (and hence constitutional) only coming when they arrive in court.

Idiosyncratic musings aside, I yield to a friend who passed along the following reflections on various aspects of the decision.

The Medicaid decision is a real win for federalism, and this should not be lost amidst the focus on the mandate.  States cannot be treated as local administrative divisions of the federal government, period.  They are independent sovereigns, and they have the right to refuse participation in a cooperative-funding program they don’t like.  And Congress can’t radically change the bargain on the program mid-way through.  The Court has never set a limit on the spending power before vis-a-vis the states (it’s last chance to do so was S. Dakota v. Dole, which tied federal highway funds to a 21-yr-old drinking age).  This is a big win for states, especially because so many programs are cooperative-funding (transportation and primary/secondary education are the two biggies besides Medicaid).

Roberts misses the importance of labels for democratic accountability.  The “Roberts is a genius” line of commentary is that he’s just hung a massive tax hike around Obama’s neck four months before the election.  True enough.  He emphasizes throughout his opinion that voters, not the courts, should hold their elected representatives accountable for policy — if the voters don’t want Obamacare, then throw out the bums who imposed it.  And he says in the Medicaid section that “permitting the fed govt to force the states to implement a federal program would threaten the political accountability key to our federal system.” (pg. 48).

Yet he misses the significant loss of political accountability in the taxing-clause discussion.  He says that we should ignore Congress’s label (“penalty”) and look past the “most straightforward meaning” (because of deference) and instead ask about the “function.”  Yet Congress’s label and the straightforward meaning are key to political accountabilityduring the legislative process.  If Congress was forced to label it a tax when the bill was introduced, then the bill may never have been passed.  We need honesty and accountability on the front end, as legislation is working its way through the system, rather than only on the back end when at best we can throw the bums out after the law is enacted.

We should not overestimate the size of the win on the Commerce Clause.  I am more wary about the Roberts’ opinion the fellow over at Slate.  Roberts’ opinion refers to the Commerce Clause power as “broad” and “expansive.”  He reaffirms the continuing vitality of Wickard, which is the bugaboo of every legal conservative.  Because so few laws regulate “inactivity” by mandating the creation of “activity,” I highly doubt this will represent an enduring challenge to the modern regulatory state.  This is a win, for sure, but only because it drew a line at the way-far-out boundary and because none of the academics thought this argument serious even six months ago.